PART 3 OF 3: THE STORY OF THE MAKING OF THE FILM 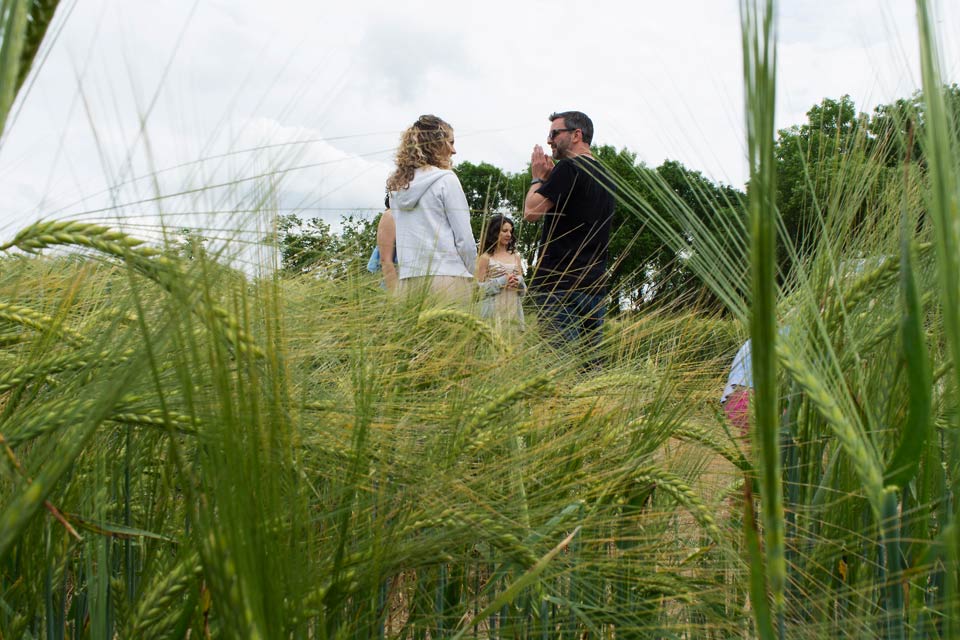 Following on from PART 1 and PART 2 of this series of 3 blogs, here I’d like to share the extraordinary experience of what goes into the making of a film. Here’s our story…

Film-maker Simon Reglar and his film-editor and all-round genius partner Laura Kettle moved into our road in Surrey, a few years ago. We became friends, and they agreed to make my first ever film, (“How a wedding dress is made”), which went on to be very successful:

Happily, their son Ted aged 1 ½ and my daughter Holly aged 3 ½ , got on like a house on fire, so most weekdays, we have a text conversation in the morning along the lines of “there’s nothing in the fridge, can we come round to yours for tea tonight?” It is within this very relaxed context that you’ll understand I had no qualms about putting my new film idea out there to see what they both thought. This was in the Spring of 2015.

I envisaged two scarecrowesses (wearing tutus made of corn) standing still in a small clearing in a cornfield. A girl appears through the cornfield, in jeans and t-shirt, and sits down forlorn and frustrated in front of them. The scarecrowesses start to circle her, each presenting a different part of a wedding dress to her to help draw out her ideas for her gown, which they intuitively know is the reason she’s sad.

Simon and Laura kindly didn’t laugh as I demonstrated (tired, whinging 4 year old hanging on to my leg) the circular nature of the design process when a bride comes to us to create her dress, and that this was what I wanted to re-create in the film…

I explained how each of our brides would typically stand in front of a mirror in our shop, and I would move across in front of her and pin on a lace appliqué or a belt or hold up a suggested alternative skirt shape, or offer a veil…the whole activity naturally always seems to be a revolving movement where I would pass in between her and the mirror, and then move around to the side, and then the back so she could see and then she’d turn to show her mum or bridesmaids who were watching from the sofa, and on we would go – revolving around her and offering alternatives until that ravishing smile appeared right from her eyes and we would all know she’d created her own perfect bespoke wedding dress design 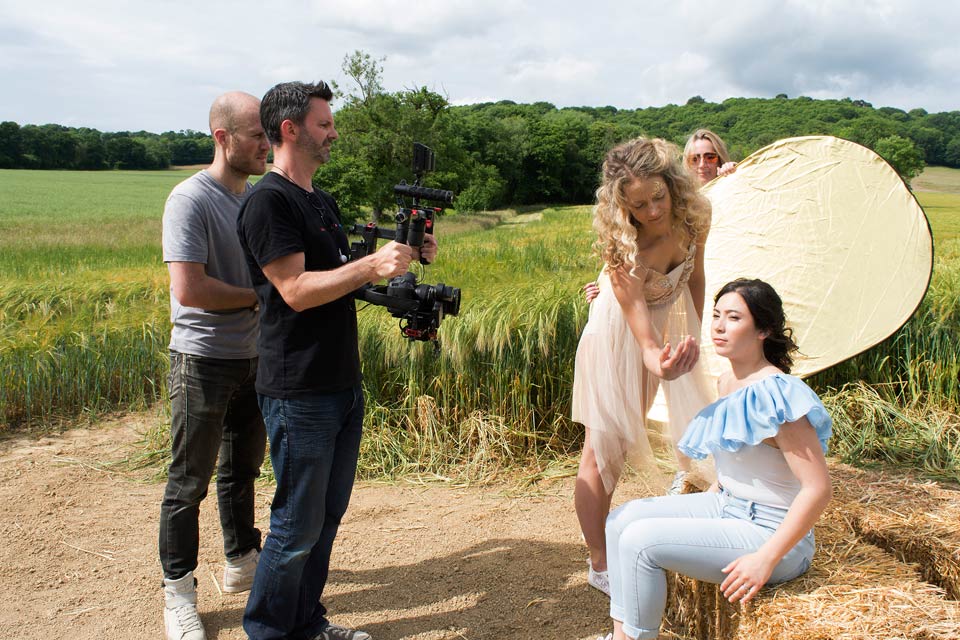 So I took Holly home and put her to bed, and started searching online for cornfields and dancers. Turned out, what I thought was corn, was in fact barley. So I became an expert in barley fields and learnt all I could about different types of barley…Spring sown tends to crop in July / early August and is shorter. We were really after Winter sown barley which crops earlier but is taller. Holly and I went searching for winter sown barley fields and found two fabulous farmers within our local counties who had beautiful fields of barley and were willing to let us use them. 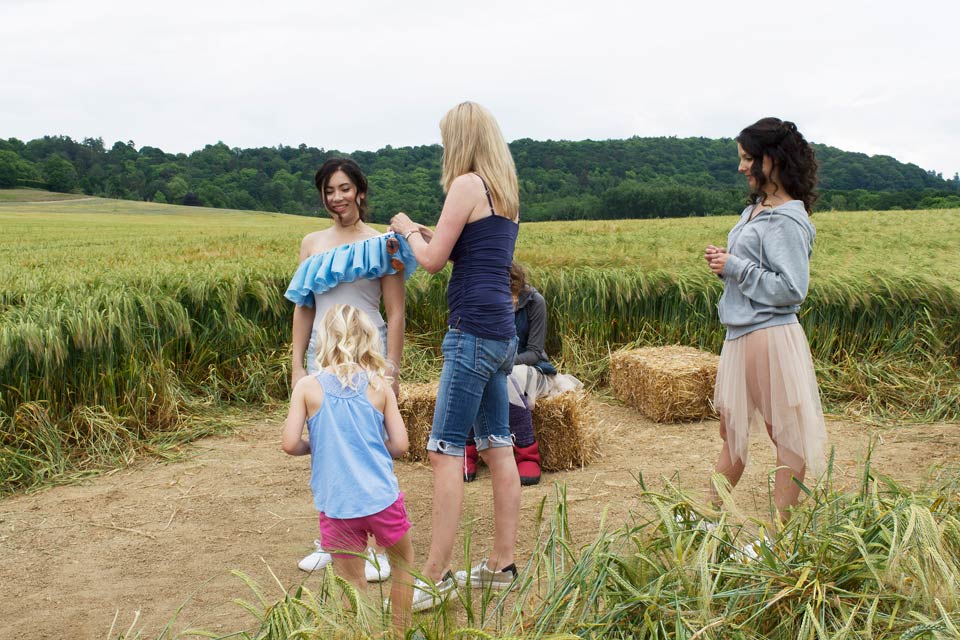 However. Life has other plans for you sometimes, doesn’t it?

The weeks rolled on, my diagnosis of epilepsy was confirmed, and along with it, the requirement for open-heart surgery that November (with some extra trimmings which I won’t bore you with…). Needless to say, the timing wasn’t great. We’d somewhat missed the boat in terms of allowing enough time to audition dancers, rehearse and prepare, before the barley was cropped, so with great sadness, parked the film. 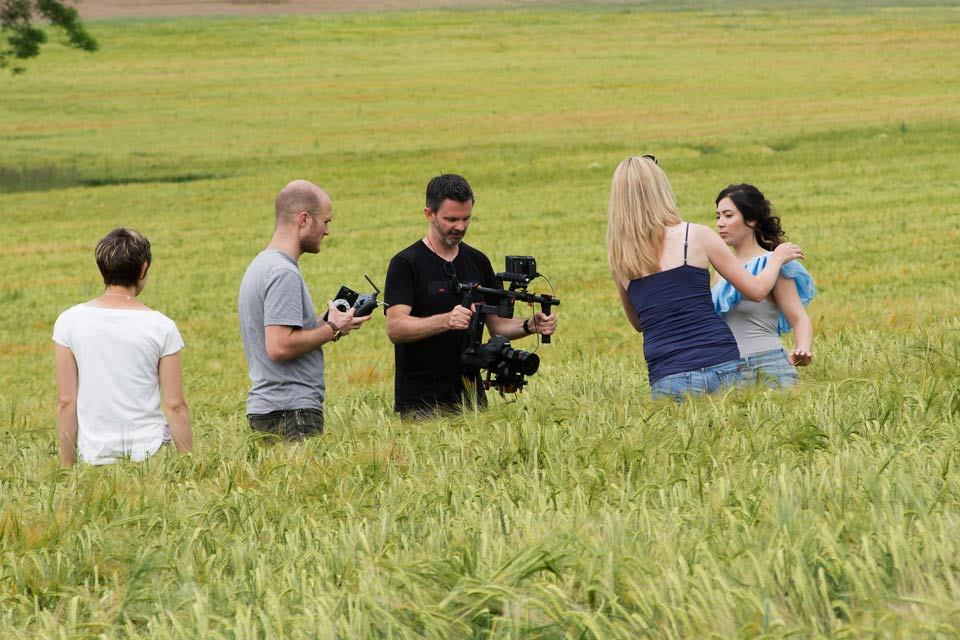 When I returned to work in January 2016 after surgery, my number 1 priority was my lovely brides – I methodically worked through every aspect of every gown on the books, with my two amazing design consultants Aleshia and Louise, and made sure not one dress left us without its bride being 100% happy.

Film-making was then back on the menu… 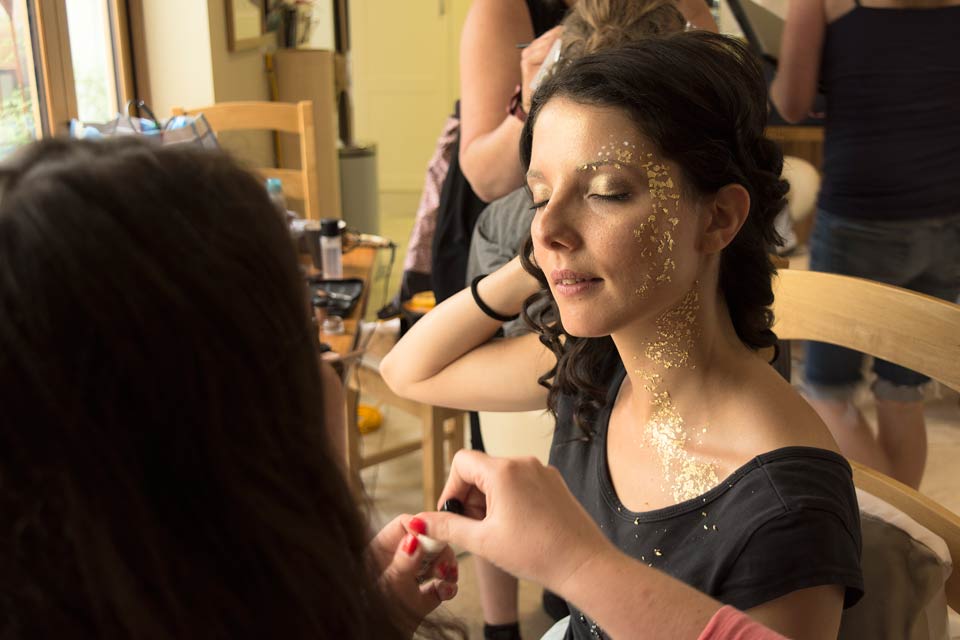 Susie, my P.A. found a dance studio for auditions, while Simon put out an advert for dancers. We then spent a morning in a cafe sifting through the many fabulously talented applicants, and picked our top 10. Our criteria was they all looked real, they all looked different to each-other, they were extremely experienced (as a dancer, Simon knew what this meant), and we invited them to the audition. 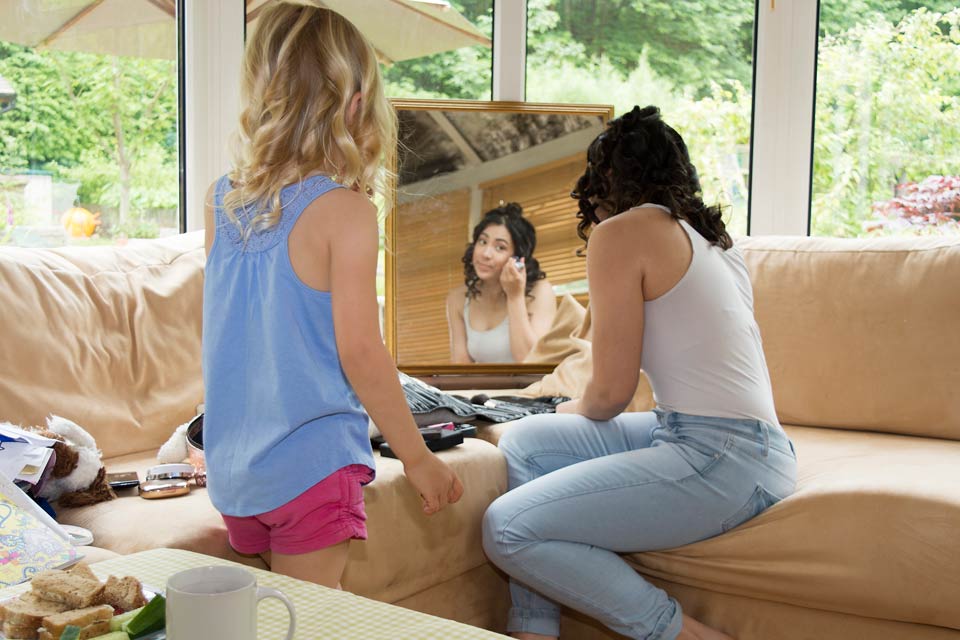 It’s funny what recovery from a major medical setback can do for your confidence… Simon had arranged for a dance teacher to come and lead a choreographed routine to warm up the girls and allow us to watch them dance in a group. When the music began for the warm-up, I sprang out of my seat, dashed (as best I could with my limited mobility at that stage) to the back of the room and joined in the warm-up along with the dancers. I think I imagined myself as a member of the FAME crew. I just. Could. Not. Sit. Still. It was AWESOME.

However, on noticing the cringing and embarrassment on the part of Susie and Simon, I did sit down, and left it to the professionals. They had been asked to prepare solo pieces, which Simon filmed and they each performed beautifully. 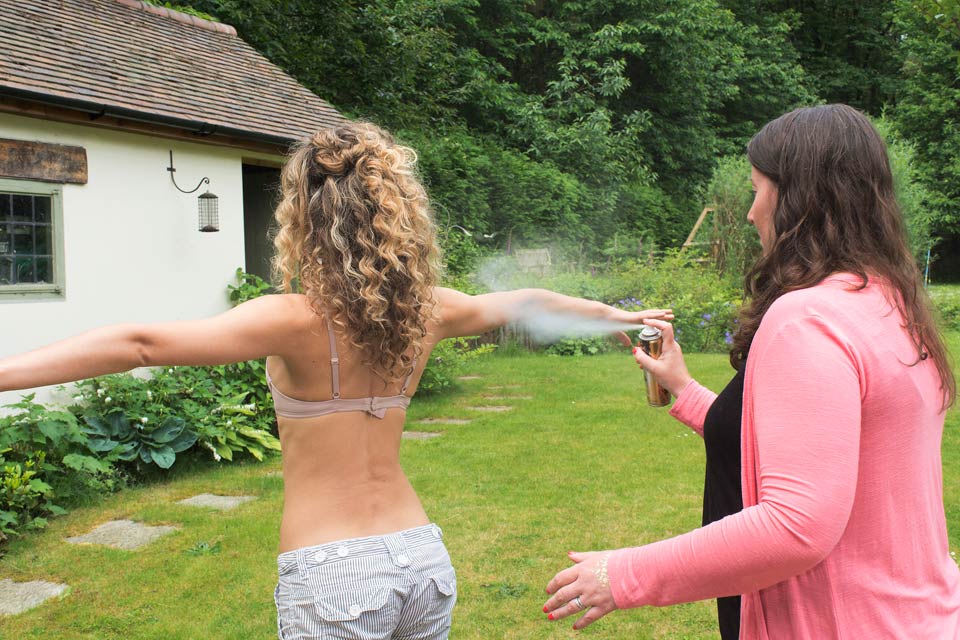 The Dream Team was selected by unanimous decision between Simon and I, immediately after the audition, so Susie went ahead and set up rehearsal time in the dance studio, while I hunted anew for a suitable barley field. There turned out to be a perfect Winter-sown barley field 5 minutes drive from where we lived. (Peter the farmer pictured with Sprites below!) 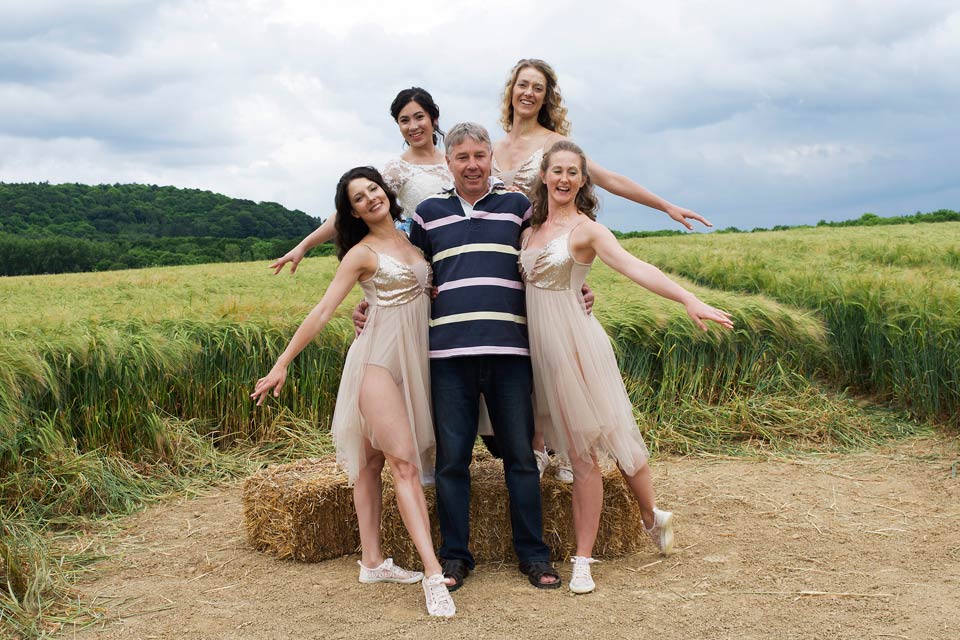 Between them, the dancer created the choreography for the film during their first rehearsal, while I watched open-mouthed at the seamless pirouetting and splits-in-the-air-type leaping about, and it soon became clear that these were not the static “Scarecrowesses” I originally envisaged, but delicate, gentle, graceful “Barley Sprites”. 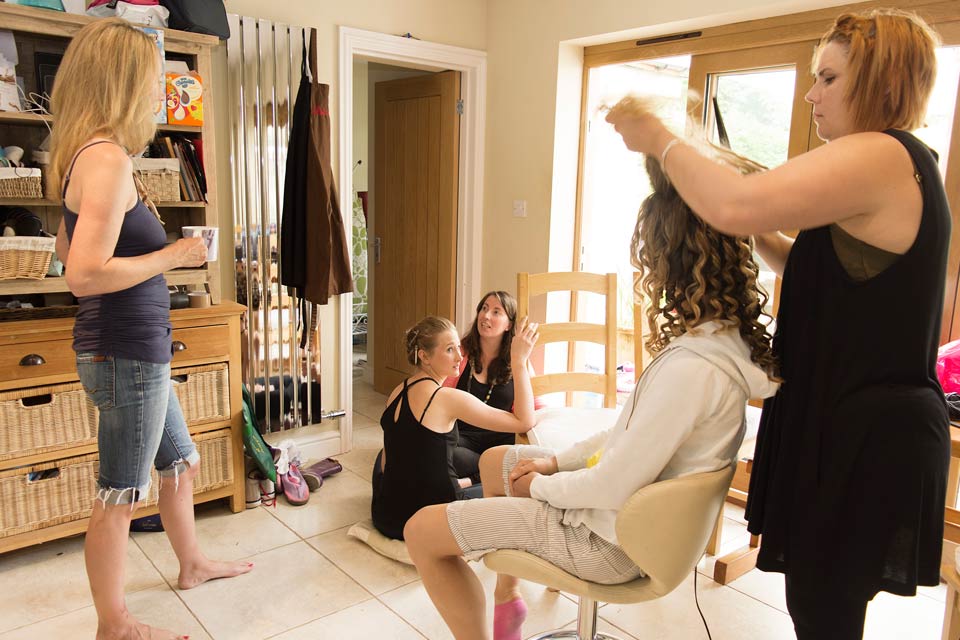 One day around that time, I was doing a fitting for a lovely bride called Ruby, who brought her friend Tania with her to her fitting (pictured above). Tania turned out to be a free-lance hair and make-up artist. We were idly chatting about the film whilst I pinned Ruby’s hem, and I somehow managed to recruit this talented and artistic lady into our Dream Team (on the proviso that it didn’t clash with Ruby’s wedding). There was talk of gold leaf and wild hair and I knew we were on the same page. 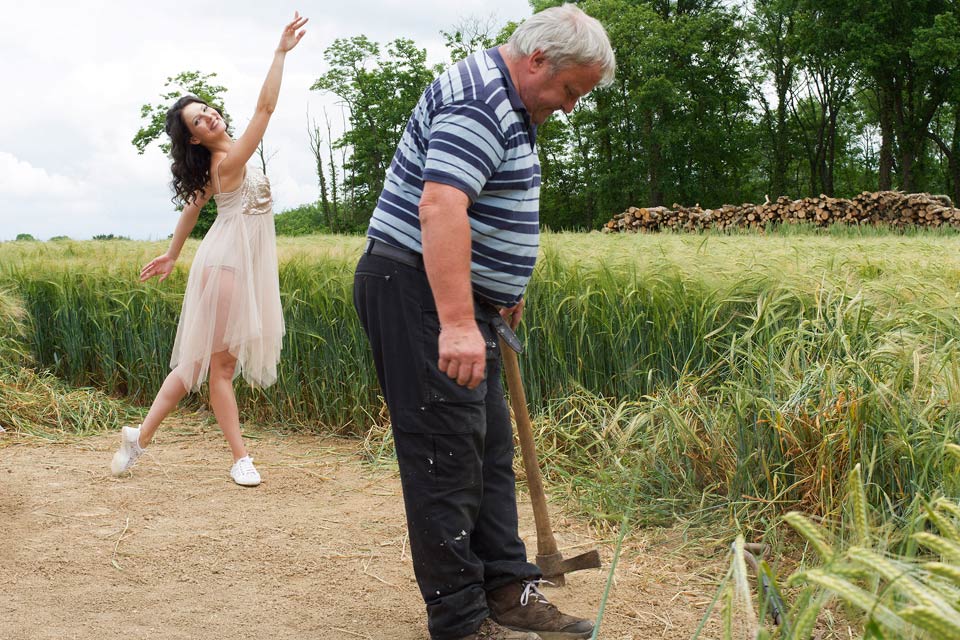 For weeks we were then on “British Weather Watch”, as well as regularly visiting the selected barley field to monitor its progress from green to gold as the summer wore on, trying to stay positive as the rain kept pouring. But it did stop. And our lovely gardened Al (pictured above), got down to the field with a rotivator and wacker-plate to ensure there were no twisted ankles. And before we knew it, the barley was golden, the dance rehearsed, the costumes ready, the sun came out, we even had a very faint rainbow, and the filming was done.

The then Sprites enjoyed a little well-deserved downtime… 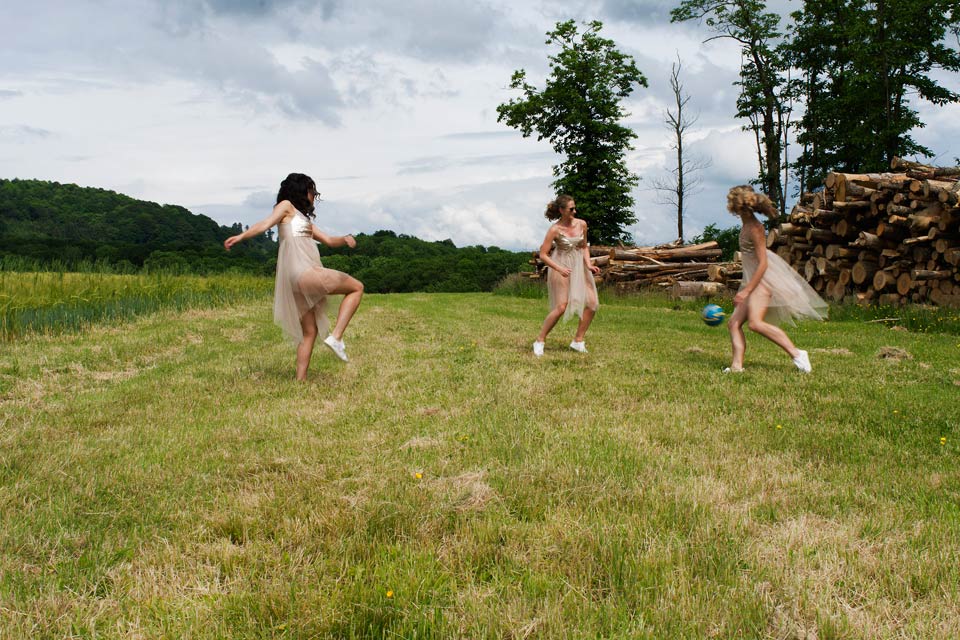 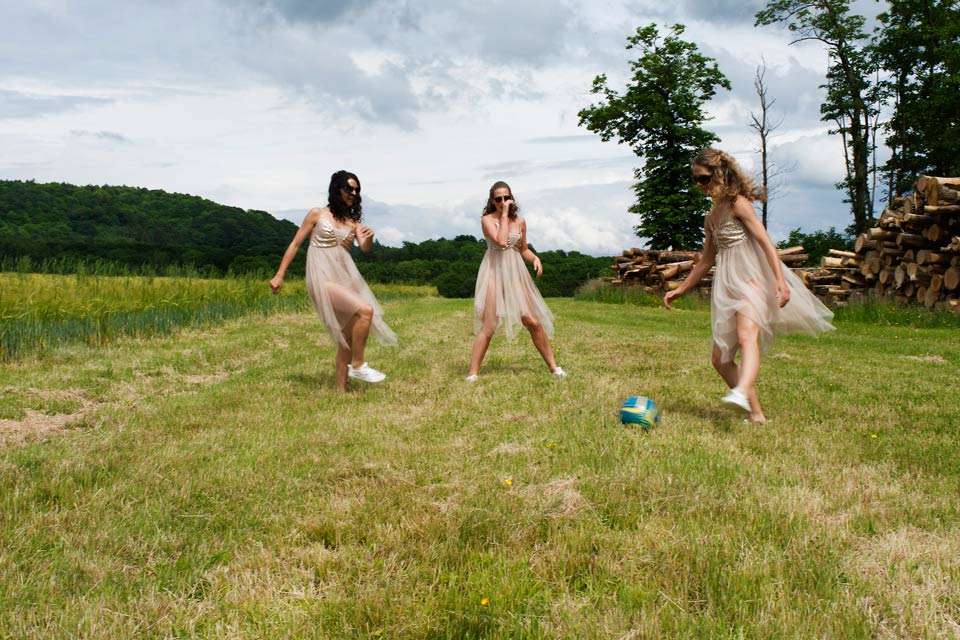 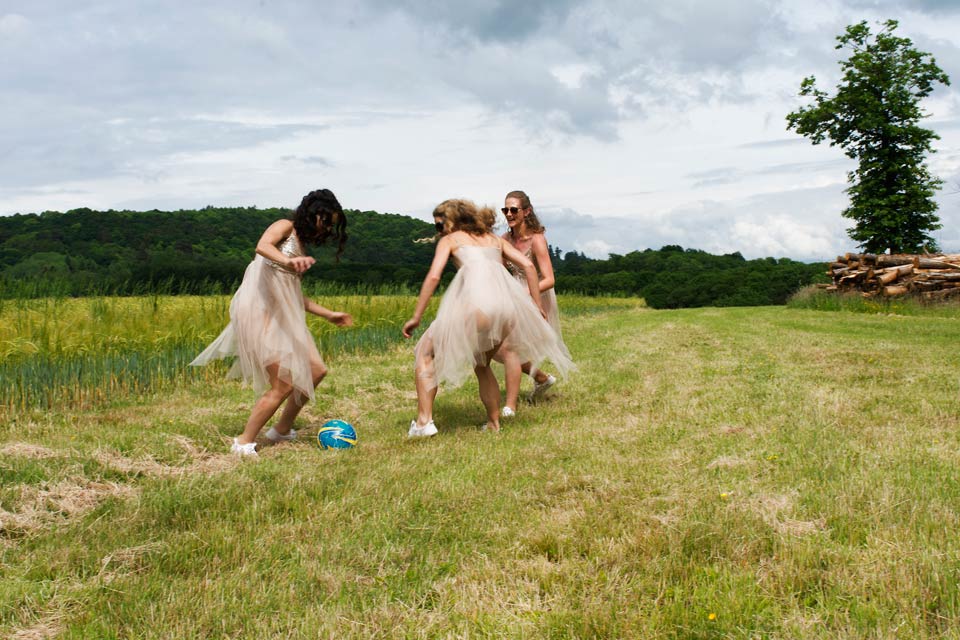 Can’t wait now until our film premiere party in London on 16th September when we all see for the first time this collaborative endeavour beyond my wildest dreams.

BE THE FIRST to WATCH it at @CarolineArthurBridal on 16th SEPTEMBER at 8pm. Enjoy! x

Thank you to the amazing team who came together to make this film so unforgettable: